I’m back on the hunt for this mysterious oil leak.  While I do think that I have a bad oil seal on the slave clutch cylinder, I suspect that I might also be leaking oil from the gear shift lever and the neutral indicator wire pass-through.  There also could be oil sneaking down from somewhere further up the engine but I’m not convinced one way or the other on that point.  The photos below are what I found when I took the plastics off my bike earlier today.  Please feel free to chime in if you have any thoughts on what I should be replacing or repairing to stop the oil bleeding. 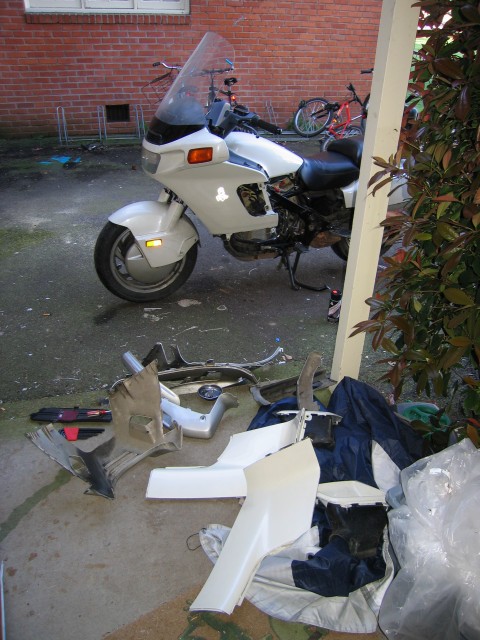 Once again I am working outside my apartment.  The tupperwear came off MUCH easier this time than the first time I had to figure out how to take it off. 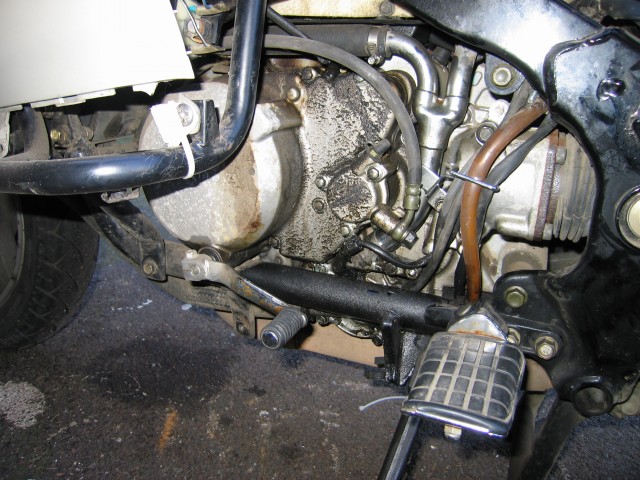 Oil oil everywhere!  It looks like the oil is either coming from further up the engine or is being blown around a bunch from the wind while I ride.  The only things I can think of above are the wire for the neutral sensor, large gaskets on the engine that I really don’t want to mess with, and that’s about it.  The cam plugs (see below) are solidly sealed now. 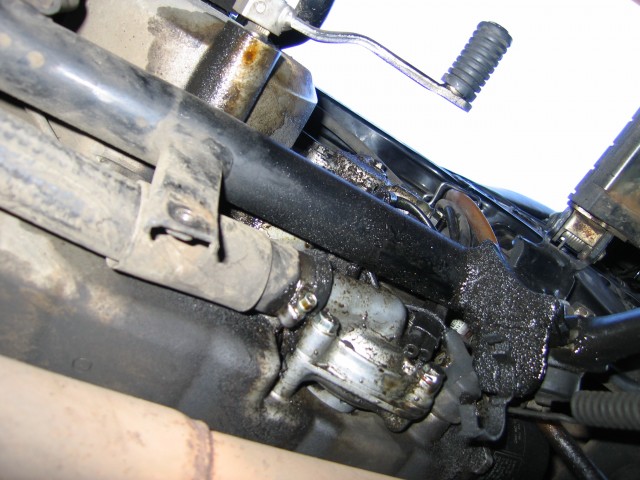 There was oil pooled in a little drip below the gear shifter hole.  I wonder if that seal is bad or if it is getting blown there from somewhere else.  Oil drips were also pooled on the bottom of the water pump.  I replaced the water pump seals back in December when I did the cam plug job. 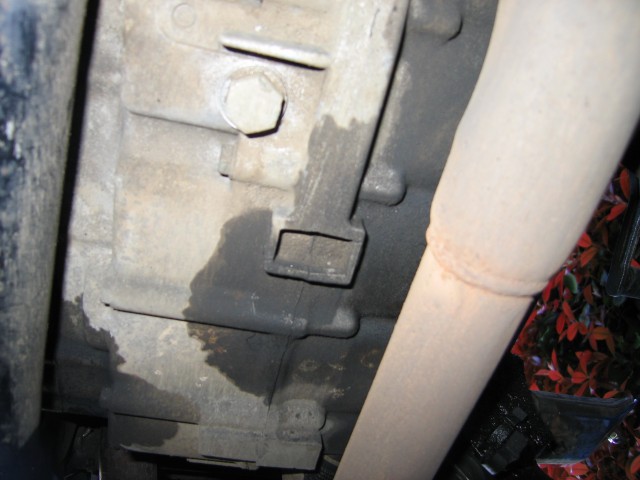 Under the bike looking from the front rearward.  The oil leak is on the right side of this photo.  The oil stain in the rear left side is from where I spilled some oil doing a field oil fill-up after having problems in the redwoods of Northern California last weekend. 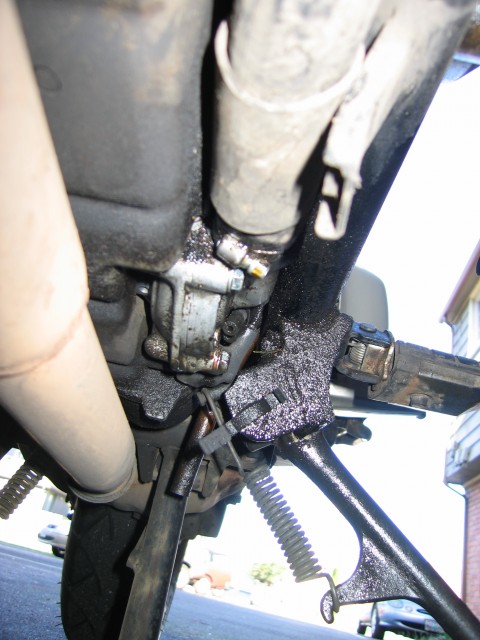 Looking back toward where the oil gets blown.  It’s interesting that there really isn’t any oil residue beyond where the kick stand attaches to the spring.  The center stand doesn’t have any oil on it nor do any of the components back by the rear tire. 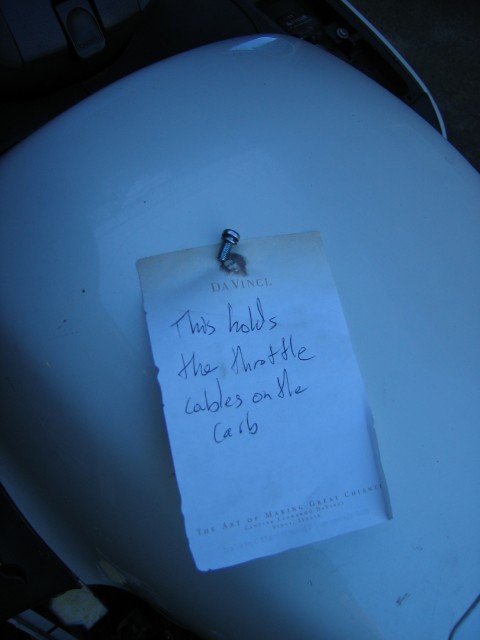 That little screw I found wedged between the drain lines coming down from the carbs and the gas cap area to where they empty out under the bike.  As the note says (so I wouldn’t forget while doing other things), that screw is one of two that hold the throttle cables to the carbs.  It was VERY lucky that this little screw didn’t fall off the bike but instead migrated to somewhere I was able to find it.  And it was even more lucky that I right away figured out where it belonged.  Back in December when I did the cam plug job, I took off the throttle cables.  Evidently my tightening down that screw wasn’t enough to keep it in place.  I put it back in with a little dab of blue loctite.  It should stay put for a long time to come. 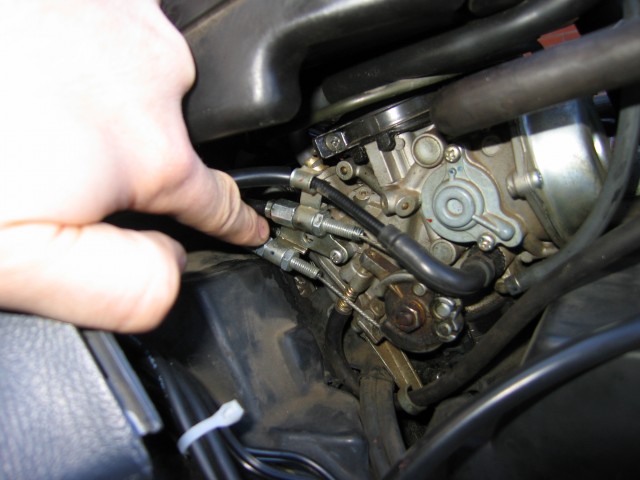 I’m pointing to where that screw belongs.  It didn’t affect the performance of the bike noticeably but eventually if it had been left like that, I think the throttle cables would have worn through faster. 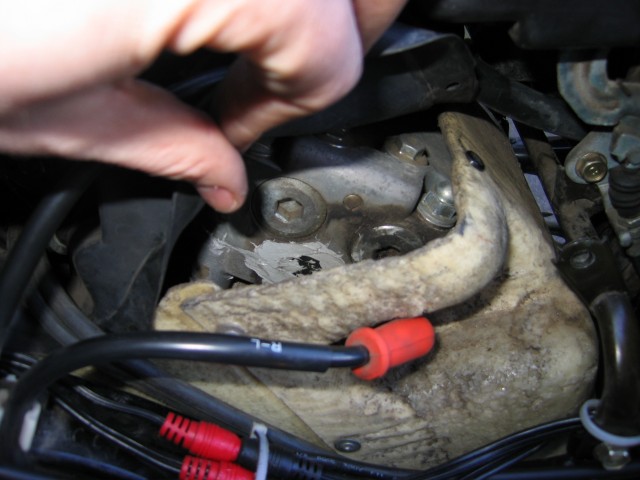 When I put the bike back together after the cam plug job, I didn’t bother re-securing the rubber boot that attaches to the fiberglass (?) engine cover and protects the carbs.  It still seems to do its job just fine but now it’s much easier for me to look in at the engine and figure out if the cam plugs are leaking.  So far all four look just fine!

Any thoughts anyone might have on what seals I should replace would be much appreciated.  Thanks for looking!

15 Replies to “Looking for oil leaks”